Given that we are going to build a condensing steam engine using a new type of combustion system and a new type of expansion motor, then the performance and efficiency will be hard to predict. We don’t yet have accurate data on our new components’ performance, however, we will hazard a few ‘guestimates’ for our first prototype engine:

The typical thermal efficiency of various heat engines are as follows:

As this will be a ‘home-made’ engine, we would be more than happy if we hit a figure of between 15 and 20% overall thermal efficiency. This prediction is based on our extensive testing of the mk7 expansion motor, which gives an efficiency figure approx equivalent to a piston-based expansion motor (i.e. power output/compressed air consumption).

However, what is all too often overlooked when efficiency is considered is the ‘efficiency’ of fuel production itself. In other words, ‘how much fuel is used to produce the fuel?’ This ratio is notoriously difficult to accurately extrapolate, but it is known as the ‘Energy Return on Energy Invested’ or ERoEI.

The typical ERoEI ratios for fuels in common use are as follows:

You can see clearly that, as bio-fuels go, wood is by far the most energy effective of the fuels in production terms, better even than petroleum and some ten times better than liquid bio-fuels. So in terms of land use, growing trees would seem to be by far the best way to grow energy. Given that there is such a huge ERoEI gap between wood and liquid bio-fuels, a wood fuelled engine even with a relatively poor thermal efficiency may still use less fuel than a highly efficient liquid bio-fuelled internal combustion engine when the whole equation is considered. In other words, its ‘twig to wheel’ efficiency will be relatively high, despite a low thermal efficiency of the actual engine). So if a highly efficient wood fuelled engine could be developed, then the ecological implications become most interesting, particularly if wood fuelled engines are powering the processing of the fuel itself. This begs the rather singular question ‘how much wood can a wood chipper chip if a wood chipper runs on wood chips’?

One final note: vegetable oil saturated wood chips (at a wood/oil ratio of 50/50) would have a ERoEI of approx 16:1, i.e. an average of the two bio-fuel components, and thus roughly comparable to petroleum in terms of calorific value, energy density and ERoEI ratio.

Many of the old mono-tube type steam cars (e.g. Stanley, White and Doble machines) had warm up periods ranging between 5 and 10 minutes. Some of the better and more modern steam cars have even shorter warm up times, but all these run on liquid petroleum fuels. As the Zennor Phoenix mono-tube boiler will be small, we’d expect a short warm up period, but the wood chip combustion system will also need a short warm up time. Our latest combustion unit can reach full heat output in just over 3  minutes and we expect the mono-tube boiler to reach operating temp after about 2 mins, giving a total warm up period of 5 to 6 minutes. This could probably be improved with continued development.

The mk7 motor test runs on our mule have shown the motor to give good acceleration with a top speed of 22mph, but we think we could do better with a higher pressure compressed air supply and improved gearing. Our problem has been that our tank pressure (130psi) is only slightly higher than the regulated line pressure (110psi) that feeds the motor. Consequently, it doesn’t take long before the tank pressure falls below that of the set line pressure and the motor power output starts to drop. This has limited our top speed when running on stored compressed air.

We expect the overall weight of the new trike-with-engine to be not significantly higher than our test mule, so we would expect to get about the same top speed when we run air trials. However, when running on steam, we hope to get a little better. We expect that the acceleration will not be quite as good but that the top speed on a level could approach about 30mph or more.

By this we mean how quickly the engine develops power as the rider starts pumping air after the system has warmed up. We think that the response time will be very brief, perhaps less than a few seconds, and it may at first feel very strange to be ‘peddling’ but without direct mechanical connection to the trike. This could, however, be quite a good thing; it will be a bit like a ‘soft start’ system that reduces the initial strain when pulling away. 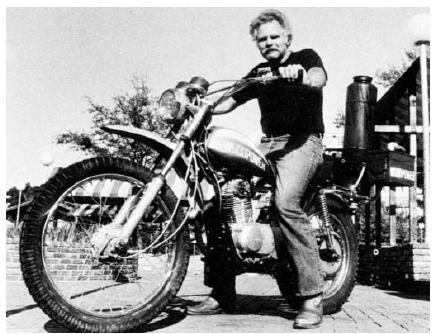 The tiny gasifier that powers this wood-burning motorcycle was constructed at the University of Florida, and made from a fire-extinguisher casing. The vehicle gets 70 km per kg of wood. (Sun Photo by Barbara Hansen)

Clearly the vehicle range will depend on the engine’s thermal efficiency and the quantity of wood chips that can be carried. Here’s a great photo of a Yamaha XT 500 (single cylinder), converted for wood fuel, which would be about the same overall weight as our finished trike.

The general rule of thumb, from GEK gasifiers of USA, is that a kilo of wood (with a 15% moisture content) will produce 1 hp for one hour. We hope to achieve around 25 miles or more per kg of wood chips, and slightly higher with vegetable oil soaked wood chips. 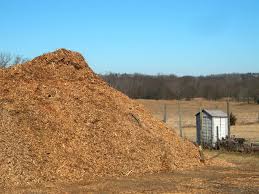 In terms of running costs, we expect this particular trike’s to be nil, given that: (a) councils and tree surgeons often have trouble finding places to dump their wood chips (see image), and (b) we also have free access to waste vegetable oil!

We are not overly concerned about the longevity of use of the motor’s displacement tubes or ‘muscles’; despite fairly rigorous testing on compressed air, we just can’t seem to wear them out! We also have some data from a manufacturer of tubes for peristaltic pumps (to which this motor is closely related) suggesting that we can expect over 200 hrs of continuous use from them. This will, of course, depend principally on the average motor loading, but we might expect 200 hrs at 20mph, which equates to 4000 miles! What we don’t yet know is how the tubes will be effected by the combined factors of pressure, heat and loading, but we’re reasonably confident that they’ll hold out. Only practical trials will answer this question properly.

This is an area we’re most interested in. A cyclist can comfortably output about 100 watts of power, and about 250w at maximum effort. Our big question is: how much amplification will we get between power-in (effort used pumping air for combustion) and power-out (final motor power to drive wheel)? Given that we’ve calculated that our MK7 motor can develop a max of 1 hp (750w), then around 4kw of heat energy will be required (with a engine thermal efficiency of 20%). We can’t be certain yet, but it would seem from tests done in our workshops that very little effort is required to pump air to make substantial amounts of heat energy – we estimate that 1 human watt of power will make 50 watts of heat. Ideally we want at least a threefold amplification factor from our combustion/steam raising system. Thus 250w of power input from the rider will result in 750w at the wheel, and so far both the maths and our practical experiments suggest that we should be able to exceed this figure. The thermodynamics here are nigh on impossible to calculate accurately, since it rather depends on a multitude of complex and interlinked factors. As a consequence, we’re having to rely on a degree of intuitive guesswork, which, whilst not not overly ‘scientific’, is at present the best we can do! So, yes, we think it will work and will produce a power amplification of at least 3:1.

The curious thing about this wood-fuelled, power-amplification concept is that the rider and engine are one, in the respect that they are a combined power source for the trike. This may be a first in the history of heat engine design and use, and what this means from a philosophical point of view is, well, we’re really not quite sure yet. What we hope is that it may trigger a reflective analysis of our use of engines in the world today. Do we really need to use them so much, and are there more sustainable ways to fuel them? What effect are they having on the world, it’s ecosystems, it’s societies, and so on.

We’re not in any way suggesting that everyone in the future should ride around on steam powered trikes – far from it – although we’re sure that a few eccentrics like us may well do! What we’re investigating are some of the practical issues concerning wood as a fossil fuel replacement engine fuel. As far as we know, no one has ever designed and built a dedicated biomass fuelled engine, yet we know that this is theoretically possible; existing engines have been successfully adapted to do so, but this is not quite the same. Wood is a fundamentally different fuel to coal or petroleum; it requires a very different engineering approach. And, were we to start growing and using it on a greater scale than at present, it would require an altogether different mindset.