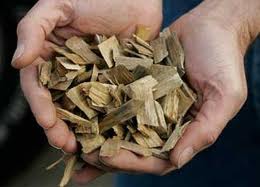 In an energy market that has become dominated by cheap coal and oil, wood has struggled to compete, and there are few examples of well managed coppice woodlands that can profitably supply fire-wood.

Many people agree that using wood-fuel as a renewable CO₂-neutral alternative to coal or oil for domestic heating is a good idea. Very few however would consider wood as an alternative engine fuel for their car/boat/generator etc., yet wood has been used successfully as fuel for both internal and external combustion engines.

A woodland that pays is a woodland that stays, as the saying goes, and using chipping waste forestry brash for engine fuel is an example of a use that could make a significant difference to the future of sustainably managed woodlands. 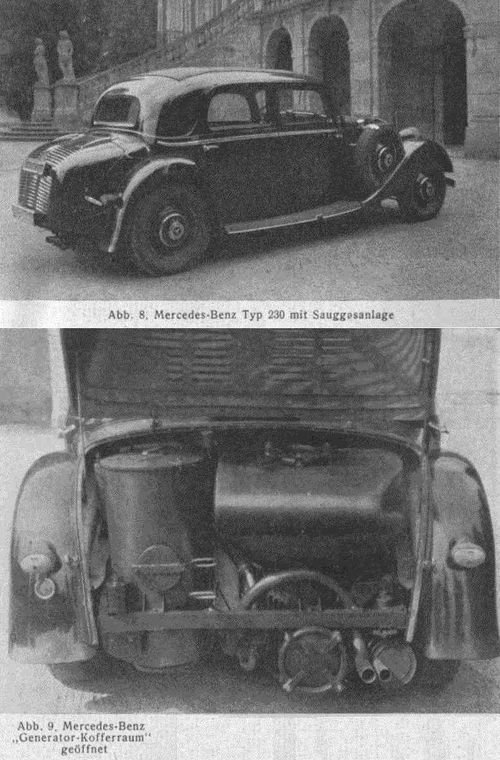 A 1930’s wood gas powered Mercedes-Benz with a neat and compact gasifier unit built into an extended boot.

Perhaps the most striking example of wood fuelled engines were those used during the second world war. As a result of the petrol rationing, about one million non-military vehicles around the world were fitted with wood gasifiers. Both petrol and Diesel engines can be adapted relatively simply for wood gas, usually only needing the fitting of a special carburettor and the gasifier unit. Roughly speaking, wood gas used to fuel a conventional piston engine will give 2/3rds the power as liquid petroleum, but this is by no means the only way to use wood as engine fuel.

Wood can also be used as feedstock to make liquid bio-fuels such as synthetic methanol, an excellent alternative to petrol and is sometimes used for high performance engines including drag-racing. Lotus Engineering have been developing a tri-fuel engine that can automatically accommodate either methanol, ethanol or petrol, and have fitted this engine to a lotus ‘Elise’. Various forms of wood based ‘slurry fuels’ have also been developed to be compatible with Diesel engines. One example is that of finely ground charcoal powder in bio-Diesel. However, specially adapted injectors and fuel pumps are generally required for use with these slurry fuels, and there are also problems of ‘settling out’. Liquid turpentine (made by the steam distillation of pine wood) can also be mixed with veg oil to reduce its viscosity for yet another form of bio-diesel with a particularly pleasant fragrance.

The immediate advantage of wood based liquid fuels is their easy compatibility with existing transport-engine technology. The only real problem is that they are energy intensive to manufacture, making them both costly and considerably less ‘green’. Solid wood has a clear advantage in this last respect, and from an ecological perspective we think what is really needed is an engine that has been specifically designed for minimally processed wood-fuel, as opposed to one that has merely been adapted from an existing engine.

The ‘apparent’ problems with wood as a solid fuel.

Any form of dry plant material is combustible, but the degree of dryness is key to its use as a fuel. One of the main reasons why wood is often mistakenly considered a low energy or ‘poor’ fuel for conventional heating duties, is simply that it has a high moisture content which has a negative effect on its heat output when burned. This is because a significant percentage of the combustion heat becomes en-captured in steam and then lost up the chimney flue. Theoretically speaking, completely dry wood should have a calorific value (energy per unit weight) better than coal and approaching that of petroleum because all types of wood, along with all other forms of carbohydrate matter, are primarily composed of hydrogen and carbon (and with a similar 2:1 ratio as petrol or Diesel ). Yet completely dry wood is not really practical as it tends to immediately ‘suck up’ moisture from the atmosphere. Even kiln dried wood for example, has a moisture content of between 10 and 20%.

This issue of heat energy being lost as steam in exhaust gases has led to wood being given two separate values, known as the upper and lower heating values (UHV and LHV). The efficiency rating, i.e. the ‘usable’ heat output of most modern wood fuelled stoves is usually rated to the LHV, which excludes exhaust steam heat. Whilst the principle of the high efficiency condensing gas boiler, that can extract the latent heat from exhaust steam (in a condenser matrix), is well known and widely used, this principle has never yet been successfully applied to wood fuelled systems. Given that steam is also formed from the combustion of hydrogen with oxygen, then the ‘flue losses’ when wood is burned is significantly high; well in excess of 20%. If wood is to be efficiently used as a renewable fuel, then this is an issue that yet needs to be solved.

The other main problem with wood-fuel is its energy density (energy per unit volume), and this is a particularly relevant issue with transport fuels. Once wood is reasonably dry, it then contains much ’empty space’; much like a dry sponge that’s full of air. Compared to super-dense fossil-fuels, wood-fuel just takes up far too much room.

A simple way to make wood into a much improved fuel.
(Or, how to make ‘high-octane’ wood fuel…)

Both the inherent negative aspects of wood fuel can be simultaneously solved by boiling dry wood in vegetable oil. This process first drives off any last remnants of contained water and then saturates the pores of the wood with oil, preventing re-absorption. This is perhaps the simplest way to give a zero moisture content wood-fuel with a now much improved energy density, yet is still a fully CO₂-neutral renewable fuel. The veg oil uptake will depend on the density of the wood. Test samples that we’ve made from willow (a low density/high porosity wood) give an oil to wood ratio of 50:50 (by weight). Interestingly, a willow/veg oil sample sinks in Diesel, which shows it has a higher density than petroleum.

The calorific value of wood can also be improved by a process called ‘torrefaction’ in which wood is heat-treated in order to break some of its tougher molecular bonds. This ‘baked’ wood process was originally developed for making improved gunpowder, and torrefied wood (also known as ‘brown charcoal’) has approx 16% higher energy/kg than fully carbonized black charcoal. Boiling wood in veg oil to above 200°C is another method of torrefaction and thus gives a third benefit in improving the overall calorific value and energy density of wood.

We estimate that this ‘triple improved’ high energy density veg oil/wood composite fuel will thus give an equivalent heat output per kg to that of liquid petroleum, and we intend to trial this fuel in our new steam engine design.

Some people consider that it has been the historical use of wood-fuel that has caused much of the worlds deforestation, but we believe this is a false theory as there is little evidence to back it up (although there have been some isolated examples where this has certainly been the case). Others argue that agricultural practice is the main cause of deforestation*, but this could be more a symptom than an actual cause. About half of the worlds forests have so far been lost, a factor that contributes to accelerated climate change and most of this has occurred within the last 250 years with a sharp increase around 1850.

Clearly this time period  coincides with the arrival of coal fueled engines, followed by humans shifting general energy dependence from wood to fossil-fuels. Wood now represents just 14% of human energy use, and we think that this is the obscure but actual ‘root cause’ of deforestation. Where wood is no longer valued as a fuel, it is not grown and the land becomes dominated by more commercially rewarding uses such as agriculture, whether actually needed or not. We now have considerable over-production of food in many parts of the world suggesting an imbalance of land usage, and this is probably not helping with the additional problem of human over-population (this again may be a dangerous form of feedback loop). Consequently we believe that a resurgence of interest and use of wood-fuel, be it for heating or as engine fuel, will ultimately lead to a degree of much needed reforestation, helping to balance out many of our ecological, social and political problems, create rural employment, increase wildlife habitat and give us fuel security for our future.

One final point is that although we intend to trial our wood/veg oil fuel, our experimental trike engine will still be compatible with ordinary wood chips. This means that if we accidentally run out of fuel somewhere and we happen to be carrying the emergency secateurs, we can always find a few dead sticks in the hedgerow to get home with…

[* Whilst we maintain that it is not necessarily agricultural practice that has been responsible for deforestation, the combined practice of tree coppicing and keeping grazing livestock on the same land almost certainly is. Grazing animals are partial to the new shoots of coppiced trees and thus prevent the natural regeneration of woodlands].