We’ve been developing a new concept of gasification/combustion system for particulate biomass; typically wood chips which are at present an underrated bio-fuel resource. We believe that wood has been ‘overlooked’ as an important fuel simply because its peculiar combustion characteristics have not yet been fully understood or adequately explored.

Wood could be simplistically described as ‘two fuels in one package’ which become separated when wood is subjected to heat. These so called ‘pyrolytic’ fuels are charcoal and wood gas, and are completely different in both their physical nature and their combustion characteristics. (By weight, bone dry wood will become approx 1/3 charcoal and 2/3 wood gas). Charcoal is composed of almost pure carbon, with a relatively low auto-ignition temperature of 350ºC. Wood gas is a complex mix of highly flammable gasses consisting of methane, hydrogen, carbon monoxide and other flammable ‘volatiles’, and with a relatively high auto-ignition temperature of 580ºC. (Most petroleum fuels used today have lower auto-ignition temperatures. Diesel for example, is around 210ºC). Consequently, if a simple wood stove is not hot enough and/or doesn’t have sufficient incoming air, the wood gas can’t ignite and is emitted as ‘smoke’. To ensure the complete combustion of all the gases, modern wood burning stoves now have thermally insulated fireboxes with heated secondary air inlets. However, ‘wood burners’ can be built in many different ways; e.g. to gasify wood in such a way that the highly flammable pyrolytic gas can be used for another purpose, such as to fuel a piston engined car…. 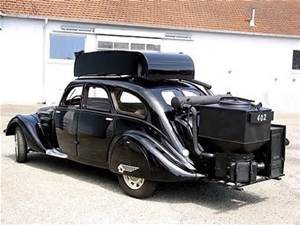 Wood gasifier units for cars were first developed last century between the wars and suddenly became popular during the civilian petroleum rationing of WW2. Approx one million cars, trucks and buses were fitted with gasifiers and successfully run on wood fuel. However, wood gas is not a ‘clean’ enough fuel to be used directly in an internal combustion engine. In most cases, the filter unit needed to clean up the wood gas was as large as the fuel hopper/gasifier unit itself. The result being a rather cumbersome ‘lump’ attached to the rear of a car. Wood gas, once made, is extremely hot and needs to be cooled before entering the engine (to maintain compression efficiency), and this cooling results in much wasted energy. So whilst the wood gas fuelled engine principle worked surprisingly well, it was not as efficient as it could have been; especially when used with wartime vehicles that were, by today’s standard, overweight and fitted with relatively low efficiency engines. Consequently, wood-gas fuelled cars (unless fitted with an extra large gasifier, as seen above) had a rather low range between refuelling; a factor that limited their popular use after the war as petroleum once again became available. Despite these shortcomings, many enthusiasts around the world still operate wood gas powered cars.

The gasification-combustion unit we’ve been developing is closely related to the wood gasifier, but would be more accurately described as a new form of advanced ‘wood burner’ concept, designed to give high combustion efficiency, controllability of burn and self-regulating fuel feed. We’ve been developing a novel system of air feed control to allow complete combustion to be be achieved (i.e. high stoichiometric efficiency) with low harmful exhaust emissions and low particulates. When up to temperature, our unit is ‘smoke free’.

We’ve been developing this micro gasification wood-chip burner for providing the heat needed to power a new steam engine design, but it has the potential to be used for many different heating applications. The unit has no internal moving parts but is of a multi-chamber design to accommodate the various aspects of fuel feed, combustion and heat exchanging. We’re also experimenting with an automatic ignition principle which allows for a rapid ‘warm up’ period. Because we’re burning all of the pyrolytic fuel products of wood-chips within our unit, intermediate filtering and cooling is not needed and the unit becomes significantly more compact and fuel efficient. Unlike the wood gasifiers fitted to cars, where the incoming primary air to the unit is ‘sucked’ in by the induction stroke of the engine, our unit is instead force-fed with air. This results in a very high ‘combustion intensity’ and we estimate that we have achieved temperatures in excess of 1500⁰C during test burns (high enough to melt part of the unit’s stainless steel liner, as we inadvertently discovered). 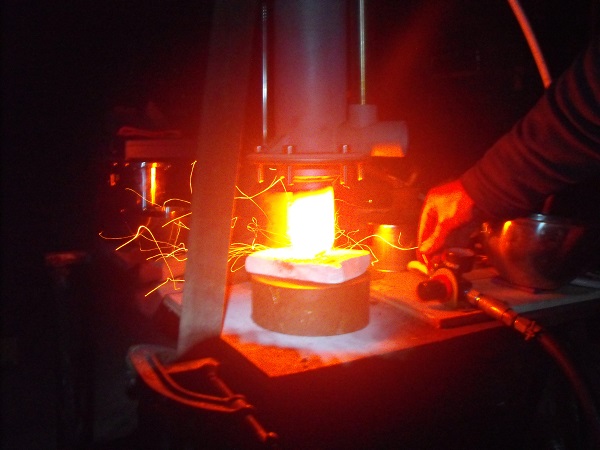 The majority of our test burns have been done with ordinary dry wood-chips, occasionally mixed with wood pellets (compressed sawdust cat litter being a cheap source of these). We have even found freshly cut willow to burn surprisingly well, showing that the unit will even cope with a high moisture content wood. Only with earlier experimental burner units did we try veg oil saturated wood-chips, but we found that this highlighted a basic problem in our burner design. We experienced a form of ‘thermal feed-back loop’ causing the burner to run wildly out of control. The test burn in question had to be hastily terminated, and sadly we didn’t have the camera running as it was quite a visually spectacular moment…

Having eventually solved this problem, we have since found the new burner design so effective and controllable with just ordinary wood chips that we have not yet resumed trials with veg oil/wood type. Further combustion trials in 2014 improved various aspects of the burner, such as the rapid ignition system, temperature regulation etc. 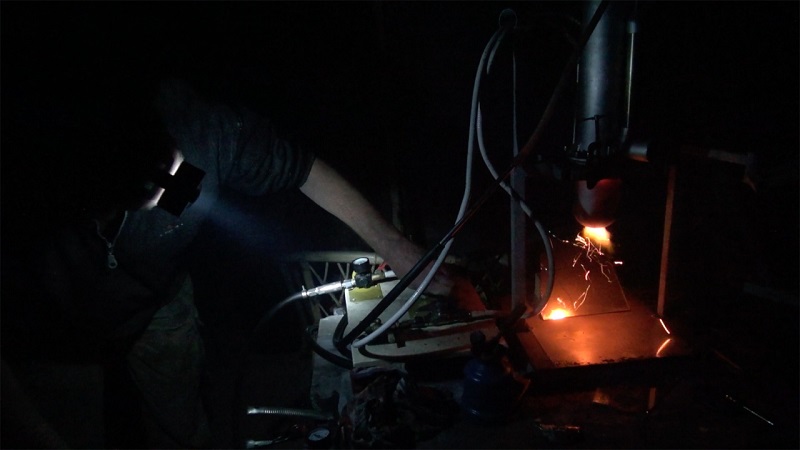 Adjusting airflow during a test burn

This combustion unit was completed and first trialled in September 2014.