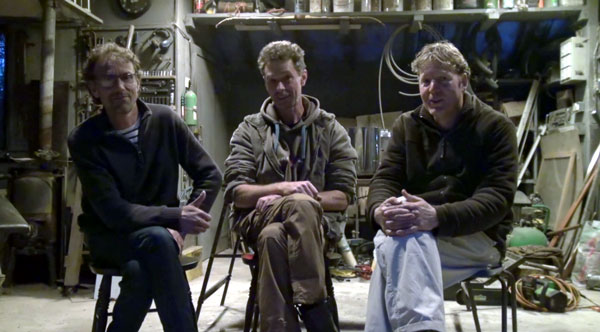 The core team consists of Matthew Thompson, Richard Blackborow and Graham Waldren, who initially started out as fellow musicians in a 10-piece ska band called Pondlife. Mat played trombone, Richard – keyboard and vocals, and Graham – rhythm guitar and vocals. This may seem an unlikely starting point for an eco-engineering project, but we do think we have the right mix of skills to undertake the various challenges involved.

Locally, Graham is well known as a craftsman in many materials. He has accumulated a wealth of practical skills over his lifetime of ‘hands on’ jobs and projects. His particular speciality is in using reclaimed/recycled parts and materials, and incorporating them into ingenious new creations and devices. One particular (and popular) favourite being the making of wood-burning stoves from old gas bottles. As a result, he has great difficulty in throwing things away and maintains a cluttered but highly versatile workshop.

On first hearing Graham’s ideas for new engines, Mat was intrigued and interested but sceptical. ‘Could it really work? What about…(lots of things)?’ Mat works as a psychiatrist and is fairly sure Graham is not delusional. Mat uses his research skills to evaluate this idea’s potential; research and experiments so far make a convincing case. Mat’s studies have included thermodynamics, implications of biomass use, historical steam technology, patent research and theoretical material limitations.

Richard’s grasp of written English is somewhat better than the others, and as a consequence, he helps communicate their ideas and research findings to the world. Specialising in freelance work for the private art sector – as well as being a passionate musician and producer – Richard brings his refined writing, presentation, marketing and networking skills to the team. As an early believer in what we might achieve together, his great enthusiasm for the project also helps to maintain momentum.